Tracey Meek's Proposal: Spectate / Translate
Earlier in the year I accidentally stumbled on an idea for an intervention art piece. My inspiration for this was people and their many hidden lives and conversations.
I have lost count of the amount of times that I have caught the tail-end of a strangers conversation, wondered what the hell they must have been talking about, imagined where their lives take them... It has become like a sort of mini addiction for me, true you don't get the highs or the chattery teeth but there is great fun to be had in stealing snippets from strangers lives.
I wanted to share the love of this wondrous past-time and get people involved and really just see if people shared my enthusiasm for such a sport.
So, a number of illustrated tags were given out as means of documentation.
The holder of the tag was to see it not just as a bit of paper but as a mission. Their mission was to look and listen.
I have visions of people rushing straight out and furiously beginning their invasion of peoples privacy, or maybe they kept it on their person until the time came when they would catch the end of a conversation and stumble on a situation. There would of course then be a huge scramble for their tag and the scrawling of the words just then stolen from that strangers mouth. It may have been easily understood, maybe nonsensical. Either way it would be documented exactly as heard.
A few weeks later a marvelous event took place at Derby's Industrial Museum, there was music and wine and dancing and such things and sure enough the tags came back. They were called, they didn't just turn up. I then translated these 'spectations' in my own fanciful live-art type way.
Work shown at Bank Street will be a mix of the unfolding's from this event and translations since made. You may attempt to figure out which conversation goes with which illustration.
http://twitter.com/TraceyMeek
tracey_meek@yahoo.co.uk 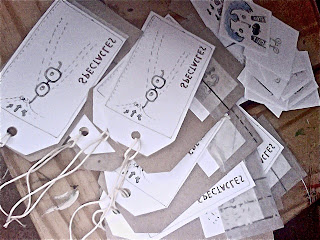 Posted by pandemic at 02:39 No comments:

Title: An album of a dog
This slideshow is meant to be presented alongside Stella's Installation Frauen Danst Frauen. At the same space (or somewhere nearby) and for the same duration.


The work An album of a dog came out of a desire to somehow reproduce or reenact Frauen Danst Frauen. The aim was to have Stella's documented performance continue. It was important to have it remain and continue differently. As something else. Stella's dance performance thus became a photo-album. The dog, who is a part of Stella's dance piece, presents an undecidability of his/her role in Stella's reconstruction. The dog's actions and movements are accentuating any (unavoidable) unpredictability involved in dance reconstructions. In the project of dance reconstructions the dance always becomes something different. Sometimes it becomes a photo-album of a dog.

Link  to the work.


Note: Stella will be the person in charge of presenting An album of a dog at Pandemic.

Posted by pandemic at 04:44 No comments:

No costumes, no narrative, plot, nor sense of place…
Frauen Danst Frauen is a reconstruction of Rosas Danst Rosas (1983) by Anne Teresa de Keersmaeker, an allegory of industrial process and of the social roles imposed on women.
Mother with daughter, sitting next to each other are copying the worker-bee movement routine. They sit down, their hair swings around their heads, they grasp onto their breasts, they stand up then sit down again, their arms reach out and retract like pistons in a copy press.
Frauen Danst Frauen is an excavation into the personal and emotional, filtered by and expressed through a purely mechanical choreography.

Requirements:
Space: A small quiet room.
Technical Requirements: A Video Projector, a DVD player, a pair of speakers.
Other requirements: A small sofa just for two spectators placed in front of the projection.

Link to the video.
Posted by pandemic at 15:59 No comments:

The proposed project for Pandemic is interlinked with a year-long project which I am undertaking.  My year-long project involves documenting my memories of each day in 2011. Before going to bed I video record my memories of that day and start each recording 'Today is a day I will never forget because...'  I have found over the past 6 months that often the memory of  how I have documented the memory remains with me, rather than the memory itself.  Over time I have become occupied with how truthful I am being in my account of my memories of each day and how, even though these videos have not been made public, I am self-censoring.  This therefore begun me examining how truthful I am being in my portrayal of events in openly social media where we advertise ourselves and our activities to the world.

So for Pandemic I propose that those visiting the event will have the opportunity to donate their memories to me rather than social media or friends.  People will be invited to write their memories of that day on a piece of paper and I will then record these memories as my own, in the same way as my year-long project. The anonymity of collective memories may offer the opportunity to avoid self-censorship and the donation of the memory itself may in turn become a memory.

Requirements:
Somewhere for people to donate their memories - a table, paper and pens
Somewhere for me to record the videos - a small quite space which is well lit
(As a potential extension to the project a t.v./laptop can be placed on the table showing the video recordings)

This is designed to be an installation so the duration is flexible.
Posted by pandemic at 11:13 No comments:

Performance 1
Title: METROLOGY
A whip, a carrot, a boombox. A stopwatch, a bottle, a tape-measure, fragments of text...: 34 objects, three performers.
Metrology is a playful choreography of signs and their constantly shifting meanings. Moving on continuums between the comic and the tragic, the formal and the informal, this work constantly places the viewer in a position of rewriting the text of the performance and her understanding of it, of figuring out the rules of the system and questioning her expectations and her relationship to the work.
An apparatus of objects and performers, Metrology is constructed out of raw materials (text, objects and actions) which were extracted from pre-existing texts. These materials were then rigorously treated and entered into a new context. The systems generated produce new significations creating a new text, a new object that dialogues with that that it was and that that it becomes in the spectator’s mind. The performers function as mediators, as facilitators of this system performing tasks which are interdependent. Time is brought on the surface in the work both through the repetition and accumulation of images and tasks, but also through the physical presence of objects like a metronome and a stopwatch.
As a text the performance is made and then destabilized through the repetition, refunctioning and recontextualization of language, objects, images and actions. The viewer is invited to actively read the work, to continually see the relationships among text, objects and performers anew; to transform it and to reflect on her position as its co-author.
Metrology deals with text both as an event and as language that is rewritten, playing with and exposing its construction. It questions our ideas about what theatre is and how we watch it. It asks questions about the nature of the engagement between performers and spectators and their co-production of meaning. The possibilities of this encounter are explored through the presentation of Metrology as a system that functions within another system, that of the context of its presentation. The work gives the space and time for the viewer to explore its territory. It promises to create moments of surprise and images that will linger in the mind of the viewer long after the end of the performance.
Technical Information:
Duration: 36 - 40 minutes
Space needed: Ideally the work is best presented in a space with dimensions of 8.5m width and 7.5m depth but can be adjusted to a slightly smaller space.
Technical requirements:
- 2 microphones on stands and an exta stand (no microphone)

- A "technician" that simply presses play and stop on a CD player and turns a floor light on and off.
- An electrical outlet to plug in a CD player  = boombox
- A floor light
- I was wondering whether you might have available or you can refer me to a person / place
in where I may be able to find the following:
- a white or black chair
- a table (size can be about: 120cm x 60cm or 150cm x 75cm or two tables
about 75 x 75cm)


Performance 2
Title: Muddle, Muddle, Toil and Trouble: Disorder and Potentiality
This works functions like an installation. It should be available for spectators for 5 hours or more. The duration of each loop is about 35 minutes (one spectator per laptop, each spectator experiences it individually like one-to-one, but three spectators can be in the room every time)
Space: A quiet empty room
Tech Requirements: 3 laptops, 3 headphones
Per
Posted by pandemic at 03:22 No comments:

Dimensions? Each approx 30x40cm
Medium? Fine line pen work with digital colouring
Content? Objects and characters primarily from Japanese culture depicted in various scenes. There is no natural connection between these objects however a relationship between them is formed through the composition. Influences range from surrealism to classical printmaking.
Below- Bang! 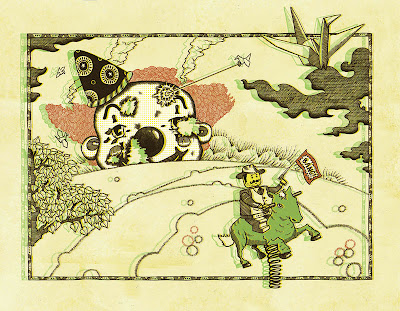 Posted by pandemic at 05:33 No comments:

THE LUNGS OF THIS CITY
CHOKE ON ASHEN LEAVES
TRY SPOTTING DIFFERENCES
WELL EVEN TEETH CAN DREAM
THESE WILDFIRES
THAT DEVILS LIGHT
LICKING AT YOUR FEET
ON THE EDGE OF WHAT WE DREAM
A PYRE RAISED ON FEASTING
FROM THE SMALLEST OF BEGINNINGS
like DANCERS AWAKENING
ALL THAT GOES UP MUST COME DOWN
FROM THE FIRST BRONZE AGE SMELT IN THE GROUND
FURNACES LIGHT UP OUR LAND
COMBUSTION TURNS THE WHEEL AROUND
DID YOU THINK THAT WE’D JUST LIE DOWN TAME?
COURT JESTERS HERE TO PLEASE THE KING?
A HILLTOP OF RED VIOLINS
WHEN I SHOT HIM, HE JUST GOT BACK UP AGAIN
Posted by pandemic at 15:17 No comments: